February 2 – Belgium have retained top spot in the FIFA ranking ahead of  Brazil and world champions France, with recently crowned African champions Senegal and The Gambia among the biggest risers.

Belgium have topped the global ranking since September 2018 and with Brazil drawing away to Ecuador in World Cup qualifiers the team of Roberto Martinez, that exited Euro 2020 in the last eight and failed to reach the final of the UEFA Nations League, will remain number one at least until March 31 when FIFA will release a new ranking.

The Brazilians sit in second place, five points behind Belgium. France complete the podium on 1786 points. Argentina have leapfrogged England to fourth place, a reflection of their consistency in World Cup qualifying. The rest of the top ten remains unchanged.

Last Sunday, Senegal won their first-ever continental crown and they have claimed 18th position in the FIFA ranking. They have been Africa’s top-ranked team for the last three years and their current ranking is also their highest position ever.

The Gambia, who as debutants went on to reach the quarter-finals of the Africa Cup of Nations, were the biggest risers, moving 25 spots up the ladder to 125th place. In March, the Scorpions will still have to play pre-qualifiers to progress to the main qualification draw for the next Africa Cup of Nations.

Elsewhere, both Canada and Costa Rica were notable moves in the top 50. The Canadian are on the verge of qualifying for their first World Cup since 1986 and defeated both the United States and El Salvador in their latest matches. They moved up seven places to the 33rd position. Costa Rica climbed seven places as well, up to 42nd. 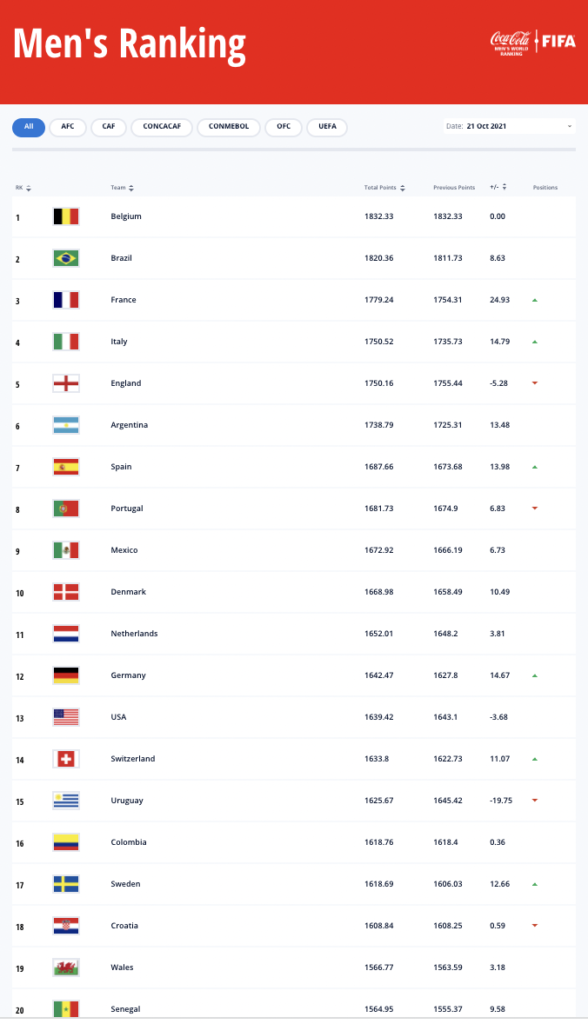