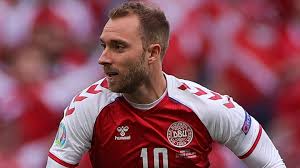 February 11 – Cardiac victim Christian Eriksen, about to resume his career in the English Premier League, says he was “gone from this world” for five minutes at last summer’s Euros but that there is nothing to stop him getting back to being as good as he was.

Eriksson, who infamously collapsed on the pitch during Denmark’s European Championship game against Finland last June and has not played since, has signed a loan deal with Brentford until the end of the season.

Opening up on the incident that sent shockwaves through the sport, Eriksson told the BBC: “I can remember everything apart from the five minutes.”

“At that time I had no idea what had happened, then it goes through my head: ‘Did something happen with my legs? Did I break my back? Can I lift my leg up?’ – all small things I was trying to do to see what happened.

“Then in the ambulance I heard someone say ‘how long was he out for’ and someone said ‘five minutes’ and that was the first time I had heard I was gone.”

The former Tottenham midfielder has been unable to continue his career at Inter Milan due to rules in Italy concerning athletes fitted with a defibrillator (ICD). But the 29-year-old is now counting down the days to the moment he can step back on to the pitch during a competitive game.

“It has been a long build-up and it still is going to be a long build up from day to day. It feels like it is getting closer and [I am] patient for the right timing.

“But it is going to be very special to be able to walk out on the pitch and play a match again after probably, at the time, seven or eight months since that happened. It is going to be amazing.”

“I will do everything I can to get back. I have had the time to be disciplined for the last six months to do extras, so even now maybe I am in a better condition than before – just the football missing. I feel like me so don’t see a reason why I can’t get back to the same level.”

“I’m not far off. It is difficult to put a date on it when it is going to happen, but hopefully in a few weeks’ time it is going to look well. It takes some time to get the football fitness, the condition-wise is good.

“I have done a lot of running and a lot of tests, so the condition is good. The football touch is something of course you get in games, but of course to get there is still a few more weeks. At the moment, when the coach sees me fit and wants me to play then I’ll be able. But at the moment we just take it day by day.”

The Danish playmaker said was not worried about how he might fare with coping again with the rigours of the Premier League, whenever that might be.

“I don’t really have any scared feelings about it, I don’t feel my ICD so if it gets hit I know it is safe enough. I am not scared of the challenges ahead and the bullies in the game, no. It is going to be very special.”