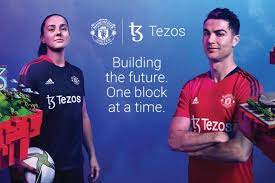 February 11 – Manchester United has entered the cryptocurrency and blockchain world for the forst time with a partnership with Swiss-based Tezos who will have their logo on the men’s and women’s training kits.

No value was given for the what the club described as a “multi-year partnership”. which will see Tezos featured on the Club’s range of men’s and women’s training kits.

Victoria Timpson, Manchester United’s CEO of Alliances and Partnerships, said: “This is a hugely exciting partnership for Manchester United because it aligns us with one of the most advanced, reliable and sustainable blockchains in an area of technology which promises to truly revolutionise the way that everyone, including the Club and our fans, can interact.

“We are especially pleased to be partnering with one of the most eco-friendly blockchains, using technology that is energy-efficient, limits carbon emissions and lowers costs, consistent with the Club’s wider efforts to promote environmental sustainability,” she continued.

The Tezos blockchain allows for fast, secure and efficient digital interactions without the need for intermediaries and champions its eco-credentials as more environmentally friendly than its rivals. The blockchain is also able to evolve rapidly with regular updates designed and approved by its global community of users and developers.

“The decision by the world’s greatest football club to select Tezos as its blockchain of choice is further validation that thoughtful design paired with strong security, low gas fees, and community-led innovation are the essential factors driving the next wave of adoption in the new digital revolution.”