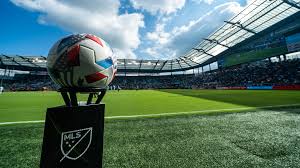 February 14 – With the MLS season kick off less than two weeks away clubs and the MLS itself are scrambling to close new partnership and sponsorship deals for the season.

Sporting Kansas City have turned previous sleeve sponsor Compass Minerals into the club’s main shirt partner in a seven-season deal running through to the end of 2028.

Compass Minerals is already designated the club’s official plant nutrition and salt provider, and supplies products that contribute to the upkeep of the playing surface at Sporting KC’s Children’s Mercy Park.

The company is also the naming rights partner of the club’s training facility – the Compass Minerals National Performance Center – which will also continue.

The rapid growth of betting sponsorship within MLS clubs is now translating (the US is opening up to online gambling and licensing operators across a number of states), has also increased the data opportunity for the MLS.

Following the European model, the MLS is reportedly in closing negotiations with IMG Arena for a deal that will see IMG Arena collect official MLS data and sell-on to betting operators.

Often referred to in the past by bookmakers in Europe as the ‘fast feed’, the data is supplied to bookmakers as the official data source and the speed at which it is supplied enables bookmakers to close markets quickly – the video feed that many bookmakers currently rely on lags the real time match by a number of seconds.

That basic provision has been expanded by official data providers in Europe to include new premium data content for bookmakers and media outlets.

IMG Arena is a division of IMG set up specifically to sell this data to bookmakers internationally.

No value has been given for the guarantee that IMG Arena would provide for the MLS.