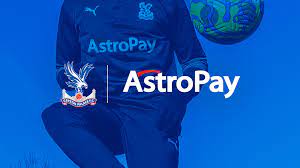 AstroPay will become Crystal Palace’s official training wear sponsor and will have its branding and logo visible on Crystal Palace’s training kit, as well as LED advertising at Selhurst Park, and visibility across the club’s social media.

AstroPay is a sleeve sponsor of Burnley and recently became main shirt sponsor of the women’s team. At Wolves, AstroPay has a package of LED boards and digital assets.

The Crystal Palace deal will initially run through to the end of the current season. Club commercial director Barry Webber highlighted the international footprint of AstroPay, welcoming “a partnership with a brand as globally recognised as Astropay. Astropay has a long history of success in the payment solutions sector, and we look forward to working with them during the remainder of the season.”

AstroPay has offices in the UK and Latin America, with over five million users, 500 merchants, and more than 200 payment methods available globally.

The sponsorship primarluly supports its brand growth strategy in the UK, following its expansion to European markets last year.

Mikael Lijtenstein, CEO of AstroPay, said: “We are absolutely thrilled to be partnering with Crystal Palace, a Premier League football team that has over 160 years of professional experience. This is an exciting partnership with one of England’s most well-known footballing institutions and we look forward to working together hopefully for many seasons to come.”