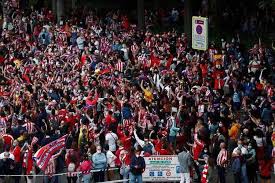 February 18 – La Liga can return to packed stadiums after Spain’s health minister said that health authorities have decided to allow football stadiums and other sports venues to operate at full capacity again.

It will be the second time since the start of the pandemic that Spanish elite football will return to full stadiums. Capacity limits will be lifted on March 4 as covid-19 cases in Spain are dropping. However, masks mandates at venues will remain in place as well as bans on eating and drinking.

Last season, La Liga played behind closed doors. This summer the new season started with stadiums at 60% capacity before allowing maximum attendances in October, but as Omicron struck that measure was rolled back with just 75% of capacity allowed in December.

In Italy, FIGC president Gabriele Gravina has said that he wants full stadium capacity back as soon as possible. “We are talking about 75% since the end of February, I would like to ask Minister Speranza and the CTS with a great sense of responsibility to accept our request to go immediately to 100% stadium capacity,” said Gravina.

“It would be a great message for everyone. Some fans who never wanted to get vaccinated are doing it now to get into the stadium.”

Italian clubs and the league have often complained that authorities have been too cautious in allowing fans to attend matches again, leading to further financial difficulties for clubs. England’s Premier League and France’s Ligue 1 have been welcoming capacity crowds since the start of the current season.