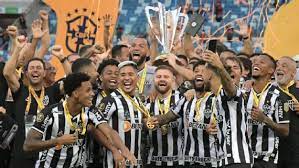 February 21 – Atletico Mineiro have won the Brazilian Super Cup, defeating rivals Flamengo 8-7 from the penalty spot after a nail-biting 2-2 draw.

In a high-quality match, both clubs went out to attack and Gabigol and Bruno Henrique got second-half goals to wipe out Ignacio Herandez’s 42nd-minute goal for Atletico. In the 75th minute, the Brazilian champions however equalised through Hulk.

Flamengo dominated spells of the game and missed a number of major opportunities. That profligacy also came back to haunt the Rio club in the penalty shootout.  Willian Arão, Matheuzinho, Fabrício Bruno and Hugo could all have won the super cup for Flamengo, but failed.

“It was suffering for the fans of Galo and we once again put our name in the history of the club,” said Atletico Mineiro goalkeeper Everson, who saved Vitinho’s deciding penalty. “I’ve been here for a year and a half and I learned to live at Atlético, which is what it is. It’s suffering.”

Despite his team playing a fine match, Flamengo coach Paulo Sousa was very critical of his players. “It seems that my team needs to take a different step, individually,” said the Flamengo coach at a news conference.

“It’s a team that’s been around for four years, got important victories through its quality and talent. Today, in terms of spirit, it’s a team that has to have the same hunger that it had at the beginning.

“What we won is in the past. The present is the important thing.”

Atletico took home €850,000 in prize money. Together with Flamengo and Palmeiras, they have become a super club domestically. The final suggests that these teams will compete again for the Brazilian crown. The Serie A kicks off on April 10 and runs until November 13.