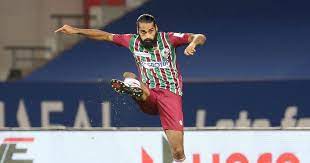 February 21 – An Indian international footballer has been hit with a torrent of criticism for making a sexist comment after his club drew an Indian Super League match over the weekend.

ATK Mohun Bagan defender Sandesh Jhingan, vice-captain of his national team, made the remark after his side secured a last-gasp point against Kerala Blasters

“I have played a match with women,” Jhingan said in a short video shot as he was leaving the ground, only to quickly apologise for implying women players were inferior.

That was too late for the video going viral before being deleted by the club.

It is unclear from the video who the comments were aimed at and what the context was. Some have interpreted it to be directed at Jhingan’s own teammates while fans of Kerala Blasters say it was directed at their team.

Attitudes towards women in sport have been slowly changing in India but they still face prejudice.

Jhingan tweeted on Sunday that the comment was made “in the heat of the moment”. He also denied that it was directed at the Kerala Blasters for whom he used to play.

“What I said was a result of the disappointment for not winning the game,” Jhingan said in his apology.