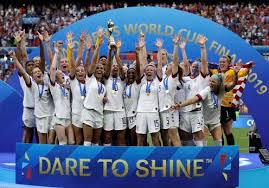 February 23 – In a landmark moment, the U.S. national women’s team has negotiated $24 million in an equal pay settlement, bringing to an end a prolonged class-action lawsuit with the US Soccer Federation.

The settlement draws to a close one of the most turbulent conflicts in the history of the American game and in a joint statement both parties said: “We are pleased to announce that, contingent on the negotiation of a new collective bargaining agreement, we will have resolved our longstanding dispute over equal pay and proudly stand together in a shared commitment to advancing equality in soccer.”

US Soccer agreed to pay a lump sum in back pay to the players, the distribution of which will be subject to players and approval by the court. A part of the sum – $2 million – will be attributed to a fund for USWNT players’ post-career goals and charitable efforts, with each player able to apply for up to $50,000.

“For us, this is just a huge win in ensuring that we not only right the wrongs of the past but set the next generation up for something that we could only have dreamed of,” said Megan Rapinoe, a superstar of the American women’s game.

US Soccer also promised to provide an equal rate of pay between the men’s and women’s national senior teams in all friendlies and tournaments, including the World Cup. It is a significant promise that will test the next collective bargaining agreement. In 2016,  five high-profile members of the women’s national team filed an equal pay complaint in US courts. That was followed by a class-action suit in 2019 on the basis that female players were consistently paid less than their male counterparts despite superior performance on the field.

Women’s football has long been far more popular and successful in the US and the men’s team failed to qualify for the World Cup 2018 after a dismal, decisive qualifier against Trinidad and Tobago whereas the women’s team won the World Cup a year later. In May 2020, a federal judge dismissed that they were paid less for the same work, but several players appealed.

“Moving forward and tying this settlement with the CBA (collective bargaining agreement) is important for both groups,” said Cone. “Because we all believe in equal pay, and the only way we can get there – until FIFA equalises the World Cup prize money – is for the men’s team, the women’s team and U.S. Soccer to get together and reach an agreement on equalising it ourselves.”

The settlement is still subject to ratification of a new CBA by the USWNT Players Association but marks a historic moment in the game.

Norway and the Netherlands are among other countries to have pledged to close the pay gap between men and women.