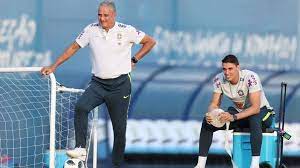 February 28 – Brazil coach Tite will step down after the 2022 World Cup, bringing to an end a 7.5-year reign irrespective of the five-time world champions’ result in Qatar.

In an interview with Brazilian TV, Brazil’s boss confirmed that this second World Cup will be his last leading the seleção. He said: “I’m going to the end of the World Cup. I have no reason to lie here.”

In 2016, Tite, with a strong record at Sao Paulo club Corinthians, succeeded Carlos Dunga and qualified Brazil with style for the World Cup in Russia, only for the Brazilians to exit the tournament prematurely in the quarter-finals 2-1 against Belgium, leaving Tite and his backroom staff deflated.

However, the Confederation of Brazilian Football (CBF) retained Tite after the World Cup, the first Brazil coach since Claudio Coutinho in 1978 to enjoy the privilege. He has led Brazil in 70 matches so far, with 51 wins, 14 draws and 5 defeats. Only Mario Zagallo and Carlos Alberto Parreira coached Brazil in more games. Tite won the 2019 Copa America with Brazil on home soil.

Having qualified for Qatar 2022 in November, the Brazilians top the table in the South American World Cup qualifying campaign, unbeaten with 39 points from 12 wins and three draws.

Brazil will be among the favourites to win the World Cup in Qatar but will have to overcome Europe’s stranglehold on the competition and Tite has reportedly lamented the lack of friendlies against European opposition because of the congested calendar and the Nations League.

The Brazilian media has already begun speculation over who will succeed Tite. The general consensus among Brazilian journalists is that there is no suitable domestic candidate, and with Portuguese coaches in high demand from domestic clubs, heads are turning towards Europe. The Brazilian national team, however has never had a foreign coach.