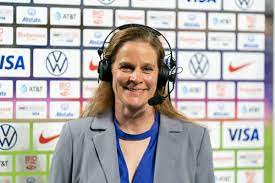 March 7 – Former US Soccer president Carlos Cordeiro failed to win a return to office at the weekend, with Cindy Parlow Cone being elected for a four-year term in the position she inherited when Cordeiro resigned in 2020.

Cone’s margin of victory was the tightest in US Soccer elections history. She polled 785.12 weighted votes to Cordeiro’s 698.26 – a 5.9 percentage point difference.

Cone (pictured) was boosted in the final days of the campaign by some well-timed USSF announcements. The federation settled their high profile pay dispute with the women’s national team for $24 million. It was an eye-watering award considering the women had lost their initial court cases (Cone is a former national team player), while the federation announced a new major sponsorship.

Cone said that the settlement of the women’s pay case was a huge win for both sides, though probably not for the non-professional and youth game in the US who will inevitable see funding reduced.

It was this pay dispute that gave Cone the opening to the US presidency after Cordeiro resigned over sexist language used in a court filing by USSF lawyers. And it was the fortuitously timed settlement of the same pay dispute two years later and for $24 million of US Soccer money that helped keep her in the position.

Cone has said that she will tackle the inequities of male and female prize money at FIFA. That will be an interesting battle if she can get it on to the agenda. To date Cone has made very little impact and had almost no presence on the international

Cordeiro, who was instrumental in securing the 2026 World Cup hosting, is not lost to football. He is on the Concacaf council and, separately, is an advisor to FIFA president Gianni Infantino.