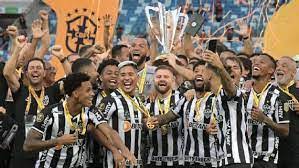 March 8 – City Football Group (CFG), owners of Manchester City and a slate of clubs around the world, is bidding to take over Brazilian champions Atletico Mineiro.

Brazilian media outlet Globo reports that CFG has offered €180 million to acquire 51% of the Mineiro club, but the Atletico hierarchy is so far unimpressed by CFG’s offer. They believe the valuation should be double what CFG has offered. In the last few weeks, Ferran Soriano, CEO of CFG, has met with representatives of the club.

Last season, Atletico Mineiro won the Brazilian championship and the Copa do Brasil, establishing itself as one of the country’s three super clubs alongside Copa Libertadores winners Palmeiras and Rio giants Flamengo, but to assemble a title-winning squad Atletico went on a huge spending spree, bringing Hulk and Diego Costa to Belo Horizonte.

The club’s spending model, relying on loans of four patrons Rafael and Rubens Menin, Renato Salvador and Ricardo Guimarães, has proved unsustainable. In June 2021, the club revealed a debt of €234 million. Atletico Mineiro is now exploring shifting from the non-profit model to a corporate structure, which would allow investors to come in.

Botafogo and Cruzeiro both opted for the ‘SAF’ model to restructure their clubs away from ‘association/membership’ structures to enable them to bring in much-needed outside investment. Ronaldo acquired the struggling Mineiro club and John Textor took control of the Rio outfit.

City Football Group has eleven clubs in its portfolio, including Uruguay’s Montevideo Torque and Bolivia’s Bolivar in South America, though CFG doesn’t have ownership control of the Bolivian club but works closely via a partnership.