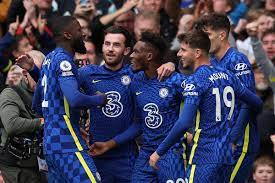 It took less than eight hours for Chelsea’s biggest commercial partner to act after Boris Johnson’s UK government moved to freeze the assets the owner of the London club.

Three asked that their logo was removed from the shirt before Chelsea’s match with Norwich last night, but there was not enough time to get new kit to the team before kick off and Chelsea played with the logo on the shirt – winning 3-1.

In a statement Three said: “In light of the government’s recently announced sanctions, we have requested Chelsea Football Club temporarily suspend our sponsorship of the club, including the removal of our brand from shirts and around the stadium until further notice,” read a statement from Three.

“We recognise that this decision will impact the many Chelsea fans who follow their team passionately. However, we feel that given the circumstances, and the Government sanction that is in place, it is the right thing to do,” the statement continued.

Three are midway through a three-year sponsorship of Chelsea that began in 2020. They will be contractually obliged to fulfil their sponsorship unless they can find a way to break that contract. That Chelsea has arguably become a toxic brand and as such is damaging Three’s, is likely to be enough to enable termination of the agreement.

“As a mobile network, the best way we can support the people of Ukraine is to ensure refugees arriving in the UK from the conflict and customers currently in Ukraine can stay connected to the people who matter to them. Therefore, we are offering connectivity packages to all Ukrainians in the UK, and those in Ukraine,” said Three.

The sanctions against will not plunge the club into immediate short term crisis as the club has been given the government dispensation to continue with its season and staff will be paid this month – the monthly wage bill at Chelsea is £28 million. However the long-term financial health in doubt.

Chelsea reported a massive loss for the covid-impacted 2020-21 season. Pre-tax losses hit £155.9 million, compared with a £35.7 million profit the previous year, when figures were buoyed by the sale of Eden Hazard to Real Madrid.

Surging broadcasting income enabled turnover to rise from £407.4 million to £434.9 million, still lower than two seasons earlier, before covid hit. But this was nowhere near sufficient to cover ordinary operating expenses of £588.3 million. (see Chelsea losses).

After repaying funding to Abramovich in 2019-20, the new accounts stated that the club had received an increase in funding of £19.9 million during the latest year reported.

The going concern statement in the accounts makes clear that the company is “reliant” on Abramovich-supported Fordstam Limited for “its continued financial support”, while underlining that it had received confirmation that sufficient funds would be “provided to finance the business for the foreseeable future”.

So the question now is when does that Abramovich funding run out with the current suspension of trading. The club is unable to sell tickets to fans (though the bulk of Stamford Bridge is already sold to season ticket holders), and even its club shop has been closed.

No end to the blues

Hyundai, the club’s sleeve sponsor in an £11 million a year deal is also considering its sponsorship  position.

“Hyundai has become one of the strongest partners in football over the years and the company supports the sport to be a force for good. We are currently assessing the situation with Chelsea FC,” it said in a statement.

Last week, Abramovich had announced that he left the “stewardship and care” of the club in the hands of the Chelsea Foundation trustees, a move perceived to prevent any sanctions. This week he went a step further and put the club up for sale, reportedly looking for $2,5 billion. The Russian acquired Chelsea in 2003 and ushered in the age of the financially dominating super clubs. Under his ownership, the Blues went on to win 19 trophies.