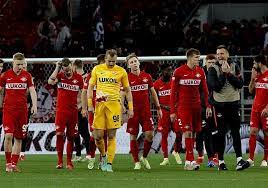 March 16 – The ban on Russian teams playing in UEFA competition has been upheld by the Court of Arbitration for Sport (CAS) but a separate and more significant ruling on Russia’s World Cup status is expected later this week.

The Russian Football Union had applied to CAS for a stay in a bid to allow Spartak Moscow to play their Europa League tie this week as a full ruling on the exclusion of Russian teams from international competition is awaited.

Spartak Moscow, the only remaining Russian side in Europe, were due to play Red Bull Leipzig on Thursday. More damagingly for the Russians, their women’s national team will be barred, as things stand now, from competing in this coming summer’s European Championship.

CAS said it was likely to make a decision “at the end of this week” on the Football Union of Russia’s bid to overturn FIFA’s decision to throw the country out of the playoffs for the 2022 World Cup.

Russia had been scheduled to play Poland on March 24 in a playoff semifinal.

The Poles have instead been awarded a bye but CAS could yet decide to overturn FIFA and UEFA’s joint decision when it makes its full judgment, which would see Russia reinstated

If that happens, it would cause huge logistical and political difficulties with Russia’s fellow playoff contenders having already refused to play them, even if that meant their own exclusion from Qatar 2022.