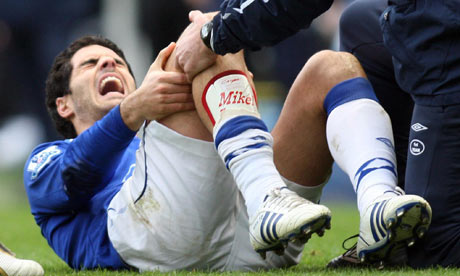 March 23 – Injuries cost the Big Five football countries in Europe (England, France, Germany, Italy and Spain) a staggering €279.49 million in the first half of this year according to a new study.

The ‘Feeling the Strain’ report published by insurance broker Howden reveals that there were 2,524 injuries in the first half of 2021/22 compared to 3,998 injuries in the entirety of last season.

Howden calculated the cost of injuries to clubs by multiplying the cost per day of a player based on their salary by the number of days they were unavailable due to injury.

Worst hit was the English Premier League, the study finding the cost of injuries to English top-flight clubs was €105.09 million with 629 individual injuries

Howden’s research is particularly timely given the ongoing debate over player welfare and whether there are too many games.

As far as individual clubs were concerned, Real Madrid had the highest injury cost in Europe at a total of €19.52 million ahead of Paris Saint-Germain (€16.79 million) and Chelsea (€16.40 million) though Bayern Munich picked up the most actual injuries at 60.

Covid-related absence cost clubs across Europe €38.47 million. The study found the five leagues reported 256 Covid-19 absences in December and a further 140 in January as the highly transmissible Omicron variant spread around the world.

The cost to clubs for the first half of this season caused by Covid was only around €10 million short of the figure for the whole of last season – €48.25 million – and represented an average cost per club of €390,000.