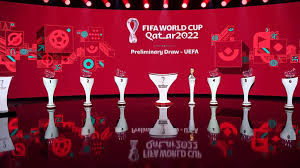 March 23 – Excitement and anticipation is mounting ahead of next week’s World Cup draw in Qatar which will be conspicuous by the three slots that will still be open because of Russia’s war with Ukraine and the Covid-19 pandemic.

FIFA has just outlined the procedure for the April 1 draw with 29 qualified teams placed into four pots according to their world ranking, which is based on national team results and will be updated the day before the draw.

Pot 4 will be completed with the teams from the intercontinental qualifiers – Asia versus CONMEBOL and OFC against Concacaf – on June 13 and 14, as well as those from the UEFA playoffs.

Teams from the same confederation will be separated into different groups, with the exception of those from UEFA as there are 13 teams involved.

FIFA also clarified that the teams who qualify via playoffs will be governed by the same principles of separating them from teams of their same confederation.

Ukraine was scheduled to play Scotland on Thursday with the winner advancing to play either Wales or Austria on March 29. But Ukraine asked for a postponement because of the Russian invasion and that match will now almost certainly take place in June, as will the subsequent playoff final against Wales or Austria.

The pandemic also created a backlog of games and caused the intercontinental playoffs to be delayed.