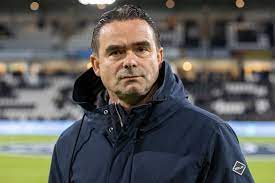 March 25 – HR Company Select has withdrawn as sponsor of Antwerp following the arrival of Marc Overmars at the Belgian club. The Dutchman exited Ajax in disgrace following allegations of improper conduct.

“The appointment of Overmars goes against the values ​​and standards of our company,” said Company Select in a statement.

Earlier this week, Antwerp appointed Overmars as new technical director of the club. Overmars will succeed Luciano D’Onofrio, who has multiple fraud convictions. The Dutchman resigned from his director’s role at Ajax for sending ‘inappropriate messages’ to female colleagues, a situation that the club CEO Edwin van der Sar labelled as “appalling”.  But that didn’t prevent him from making a swift return to the game.

“We are very surprised by this decision. As a permanent partner and sponsor of RAFC, we were neither consulted nor informed in advance,” said Company Select.

“The decision to appoint Mr. Overmars, who was recently accused of repeated transgressive behaviour and who is currently subject to an independent investigation in the Netherlands, is directly against the values ​​and standards of our Select Group.”

At a news conference, Overmars brushed aside the issue that had forced him to exit Ajax. Antwerp said that it viewed its new employee’s past as a “private matter”.  Antwerp manager Sven Jaecques said that Overmars’ values were a match with the values of the club, but that Antwerp had not specially talked to female employees.

The press conference drew widespread condemnation in Belgium as well as in the Netherlands.

“We sincerely believe that after a conscious period of self-reflection, every person can gain insight and deserve a second chance. We therefore deeply regret that the moment was missed during the press conference to testify serenely, cautiously and deliberately. of this process of self-reflection and the acquired insight, neither by the management of Antwerp, nor by Mr. Overmars himself.  We have neither heard nor seen any care in the communication about the problem,” said Company Select.