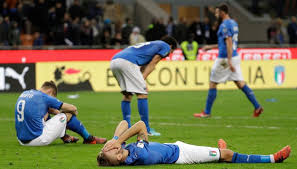 Italian legend Giorgio Chiellini summed up the mood perfectly when he described his team-mates as “destroyed and broken” after they were stunned by unheralded North Macedonia in Thursday’s World Cup playoff semi-final, meaning Italy will miss the finals for the second consecutive time.

The unthinkable happened in Palermo as the Azzurri were beaten 1-0 courtesy of a last-gasp goal by Aleksandar Trajkovski despite an incredible  32 shots on goal, compared to just four from the visitors.

Italy also failed to qualify for the 2018 World Cup in Russia after losing to Sweden in a two-legged playoff. That was the first time since 1958 that the footballing powerhouse had missed out. But now it’s happened again, unprecedented for the four-time world champions and coming just months after winning Euro 2020.

Just like five years ago, at the final whistle the Italy players slumped to the ground in tearful disappointment but this was far worse after a monumental upset.

“We are all destroyed and broken but we have to start again,” Chiellini said. “At the moment it’s difficult to talk about it, it will remain a great hole.”

Chance after chance was squandered by the hosts before, in stoppage time, Trajkovski, who plays in Saudi Arabia for Al-Fayha, broke clear to hit a stunning winner and spark wild North Macedonian celebrations.

“It is a huge disappointment,” Italian midfielder Jorginho told Rai Sport. “It hurts, it hurts so much.” We have always created and dominated matches but we have not been able to finish teams off. It is not to blame anyone in particular but it is the reality. I don’t know why we haven’t been able to do this, I am also involved in this, and it hurts me to think about it.”

Italy boss Roberto Mancini guided his nation to European glory with victory over England in the final of Euro 2020 in July. But they finished runners-up to Switzerland in their World Cup qualifying group and have now paid the price.

“This summer I had my greatest joy and today is the biggest disappointment,” said Mancini. “It’s hard to speak. I’m really sorry for the players. That’s football. When you lose, you have to suffer and remain silent, there is nothing to do.”

North Macedonia, ranked 67th in the world – 61 places below Italy – now go on to meet Portugal in their play-off final on March 29 after the Portuguese beat Turkey 3-1.

“I am very happy for [Aleksandar] Trajkovski with his goal,” said manager Blagoja Milevski. “The game was prepared in this way, we know that Italy are a great team. We know our strengths. Before the game I told the guys to have fun and they did just that.”

The Swedes will now meet Poland in a winner-takes-all showdown, the Poles having received a bye after Russia were kicked out.

Wales, trying to reach the finals for the first time in 64 years, will have to wait until at least June to find out who they will meet for a place in Qatar after Scotland’s playoff with Ukraine was postponed.