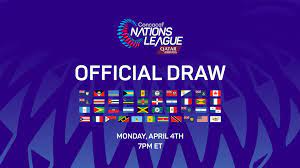 April 6 – Concacaf completed the draw for the second edition of the Concacaf Nations League (CNL) which will serve as a qualifier for the 2023 Gold Cup.

Perhaps the pick of the groups in League A is Group B which will see Panama given the opportunity to gain revenge over Costa Rica which beat them to the final World Cup play-off slot.

World Cup group winners Canada have been drawn with Honduras who finished bottom of final World Qualifying but showed signs of returning to former standards in the final rounds of qualifying. Curaçao are also in the gourp and are something of an unknown quantity having had to pull out of the Gold Cup before kicking a ball after their squad was decimated by the covid-19 virus.

Mexico will face a Jamaican team that has quality in its ranks but has so far not managed to perform to expectations. A fast improving Suriname who have been exploiting their Dutch heritage links will also add an uncertainty to the group play.