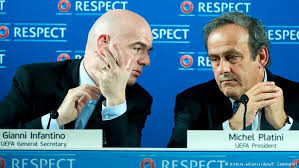 April 6 – After largely remaining out of the public eye since the expiry of his FIFA ban, Michael Platini is back in the spotlight with another legal offensive aimed at his nemesis Gianni Infantino.

Once Infantino’s boss when they occupied the top two positions at UEFA, Platini has long pointed to a conspiracy to stop him from gaining the FIFA presidency which went instead to Infantino.

The former UEFA president has always insisted he was innocent over that infamous CHF2 million ‘disloyalty payment’ that shattered his dream of taking over FIFA after the fall of Sepp Blatter.

And now, it has emerged that Platini’s lawyers have filed a criminal complaint in France alleging “active influence peddling” by Infantino against him gaining the top job in world football – and that Marco Villiger, FIFA’s legal director until 2018, was complicit.

The complaint, filed last November with the French Prosecutor’s Office, seeks to have French justice take charge of an investigation which has already been shut down by Swiss authorities.

Infantino has long been embroiled in a case involving three undocumented meetings with Lauber in 2016 and 2017.  The suspicion is that Infantino was seeking information on investigations into FIFA and its former executives, potentially with the intention to influence the course of those investigations.

One rumour that not died down is that Lauber was also given information by Infantino regarding the disloyal payment case that brought down both Platini and former FIFA president, Sepp Blatter, now in his 80s.

Their removal from FIFA’s politics opened the door for Infantino to stand for FIFA president, an election he won just weeks after both Platini and Blatter were banned in 2015. Infantino had claimed he was only ever a placeholder for Platini in the election race and that he would move over once Platini was cleared. That didn’t happen and has riled Platini ever since.

Media reports say that under French law, active influence-peddling is defined as using influence to obtain a favourable decision from a public official, in exchange for undue advantage.

Platini’s complaint does not make clear the precise nature of the alleged offence but what is clear is that the Frenchman’s long-running feud with Infantino is far from over.