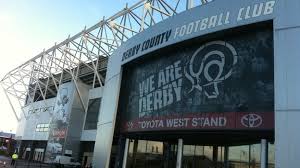 April 7 – American businessman Chris Kirchner has been named as the preferred bidder for English second-tier side Derby County, the club’s administrators have confirmed.

Kirchner, 34, said back in October he wanted to take Derby, one of the great names of English football, out of administration and was seeking approval from the English Football League (EFL) to become the owner of the club.

“Following a rigorous and well-documented marketing process, the joint administrators… have accepted an offer from Chris Kirchner to acquire Derby County Football club out of administration,” the administrators said in a statement

“Mr Kirchner had initially expressed an interest in acquiring the club in late 2021, and the joint administrators have welcomed Mr Kirchner’s renewed interest.”

The news will a relief to fans of the relegation-threatened Championship club who have been in administration since September 22.

Kirchner told the BBC that “there is still a lot of work to do”, but that he is “excited for the future.” His bid does not include the stadium, which is owned by the club’s former majority shareholder Mel Morris.

Kirchner is the CEO of software company Slync.io, a global logistics technology provider and has an estimated net worth of £3-4 million – not enough to buy Derby County on its own. The administrator had already turned down bids believed to be in the region of £40 million, but included the acquisition of the Pride Park stadium from Morris. It is understood that £50 million was closer to the expected price.

Details of Kirchner’s financing have not been revealed, nor has the price he has offered for the club.

Derby still face a battle to avoid being relegated to England third tier for the first time since 1986. They are currently nine points adrift of safety with six matches remaining.