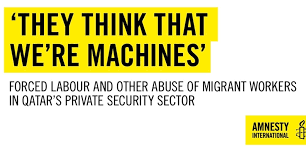 April 8 – A new report from Amnesty International has revealed that security guards involved in projects linked to the 2022 World Cup in Qatar are being subject to conditions that “amount to forced labour” with the human rights group urging FIFA to act.

In a damning 74-page report titled ‘They Think That We’re Machines’,  Amnesty documented the experiences of 34 current and former employees from eight private security companies in Qatar, the host nation for the 2022 World Cup.

The report found multiple labour cases of abuse, that fit the definition of forced labour, and in violation of Qatari law. Some of the security guards in question worked 12hr shifts for months on end without a day off.

Amnesty wrote: “The security guards, all migrant workers, described routinely working 12 hours a day, seven days a week – often for months or even years on end without a day off. Most said their employers refused to respect the weekly rest day which is required by Qatari law, and workers who took their day off anyway faced being punished with arbitrary wage deductions. One man described his first year in Qatar as ‘survival of the fittest’.”

Some guards reported being “heavily financially penalised” for misdemeanours such as going for a toilet break.

“Many of the security guards we spoke to knew their employers were breaking the law but felt powerless to challenge them.

“Physically and emotionally exhausted, workers kept reporting for duty under threat of financial penalties – or worse, contract termination or deportation.”

He called on FIFA to do more.

Last week, FIFA staged both the FIFA congress and the World Cup draw in Doha as the global finals rapidly near.  Qatar won the right to stage the global finals in 2010, but ever since the Gulf nation has faced huge criticism over its human rights record and treatment of labour workers. In 2017, Qatar abolished the infamous Kafala system, but repeated reports from NGOs and media outlets suggest the reform has not been so far reaching despite a glowing .

Cockburn continued: “With the World Cup just months away, FIFA must focus on doing more to prevent abuses in the inherently perilous private security sector, or see the tournament further marred by abuse.

“More broadly, FIFA must also use its leverage to pressure Qatar to better implement its reforms and enforce its laws. Time is fast running out – if better practices are not established now, abuses will continue long after fans have gone home.”

In response,  FIFA said it “does not accept any abuse of workers by companies involved in the preparation and delivery of the World Cup.”

“Following inspections during the Club World Cup and Arab Cup, contractors that failed to comply with the required standards were identified and the issues found addressed on the spot.”

Local organizers the Supreme Committee for Delivery and Legacy said of their decision not to renew contracts with two companies: “Unfortunately, three companies were found to be non-compliant across a number of areas during the 2020 Club World Cup and 2021 Arab Cup.

“These violations were completely unacceptable and led to a range of measures being enforced, including placing contractors on a watch-list or black-list to avoid them working on future projects – including the Fifa World Cup – before reporting [them] to the Ministry of Labour.”

Qatar’s Ministry of Labour however was damning of Amnesty’s report and accused the organisation and its report of “selectively” highlighting “a small number of cases where violations persist” and claimed that the organisation “ignores the positive impact of Qatar’s reforms across the whole population”.