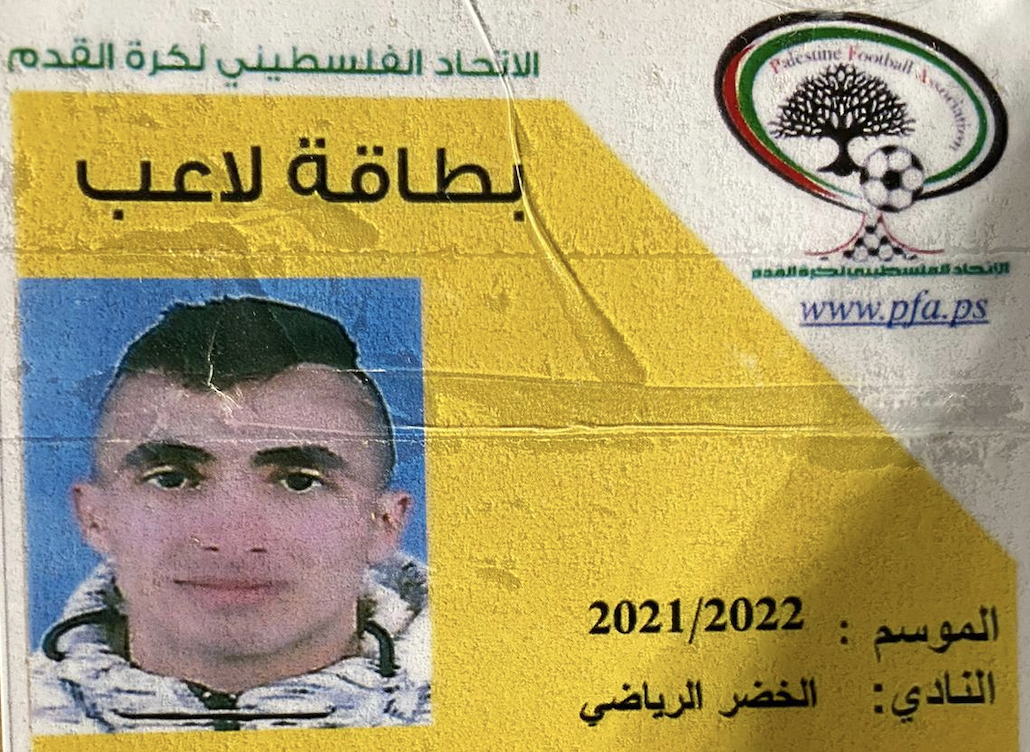 April 11 – While the world is watching with horror and condemnation the Russian invasion of Ukraine, the increase in violence in Palestine and the West Bank has gone barely noticed in international media.

In football, so often the soft geo-politics of the world’s bigger issues, Palestine would be forgiven for believing that the world has once again forgotten them and their treatment at the hands of the Israelis.

Today the Palestinians are mourning the death of another young football player, shot dead by Israeli so-called security forces.

Mohammad Ali Ahmad AlGhneim, 19 years old, should have been playing for the Al-Khadr Club on Sunday in the Palestinian 3rd division/South.

Instead his family, teammates and the Palestinian FA are burying another young talent.

AlGhneim lived in his family’s house, near the infamous separation wall (often referred to as the Apartheid Wall) that Israel began building in the occupied West Bank in 2002, claiming that it was necessary for security. The wall has drawn international condemnation and cuts into Palestinian territory and has resulted in the confiscation of large swathes of fertile Palestinian land, as well as the ghettoisation of Palestinian towns and villages.

At the weekend a demonstration was organised protesting what they claimed was the execution of a woman in a field by Israeli soldiers, near AlGhneim’s family home. It is unclear whether AlGhneim was taking part in the demonstration which was reportedly a non-violent protest on the Palestinian side of the wall. AlGhneim was shot in the back by Israeli soldiers, and died immediately.

AlGhneim is not the first footballer to be shot by Israeli forces and with the escalation of violent raids by the Israeli settlers, which are now being met with counter-violence, he will likely not be the last.

There are close to 300 illegal settlements in Occupied East Jerusalem and the West Bank with about 700,000 Israeli settlers. According to the UN Office for the Coordination of Humanitarian Affairs, at least 902 Palestinian-owned structures were demolished or seized by Israeli government authorities in 2021, and an additional 72 in 2022 so far.

The harassment of Palestinian footballers, the impounding of equipment, the refusal to allow players to travel through border crossings and the general violence that has seen players shot and killed, as well as stadiums damaged by Israeli shelling (the Israelis claim terrorists are using stadia to fire rockets into their territory) is well documented.

Under FIFA president Gianni Infantino the world governing body has pretty much turned a blind eye to the Palestinian football plight, with Infantino having repeatedly sided with the Israelis, paying lipservice to Palestinian football (he even fabricated a bogus visit to the PFA while on a hand-shaking trip to Israel), and disbanded any attempts at finding a working co-operation that would enshrine the right for the Palestinians to carry out football activity like any other FIFA member.

FIFA used to have a slogan ‘FIFA – For the Game, For the World’. With Infantino having repeatedly refused to be drawn into condemning Vladimir Putin’s blood lust in Ukraine, the Palestinians will not be the only ones wondering what kind of world Infantino is envisioning.