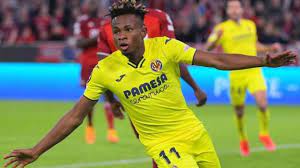 April 13 – Seventh in the Spanish league, Villarreal pulled off a stunning Champions League upset on Tuesday night as they scored a late equaliser to knock out German giants Bayern Munich to reach the semi-finals along with Real Madrid who fortuitously eliminated defending champions Chelsea.

Samuel Chukwueze’s (pictured) 88th minute goal earned his team a 1-1 draw on the night in Munich to advance 2-1 on aggregate and leave the six-time winners, who had won 12 of their previous 13 home games in the competition, totally shellshocked.

After Robert Lewandowski drilled the ball in off the post after 52 minutes to level the tie, it was attack against defence. But in the dying moments Villarreal, who called on all their experience from winning last season’s Europa League, made Bayern pay for missed chances with a decisive sucker punch. They will now play Liverpool or Benfica in the last four, with the English side leading 3-1 after the first leg in Portugal and the return at Anfield tonight.

“If you want to achieve something in this competition you need to beat the big teams,” said manager Unai Emery said whose team eliminated Juventus in the previous round and had only two shots on target. “We are a small city but they are strong players.”

Villarreal were joined in the semi-finals by Real who knocked out Chelsea but only after extra time and by the skin of their teeth.

Leading 3-1 from the away leg, the 13-time champions were expected to advance without too much pain but incredibly, Chelsea surged into a scintillating 3-0 lead in the Bernabeu and were on the verge of a miracle comeback before Rodrygo levelled the tie at 4-4 with just six minutes to go to force extra time and Karim Benzema headed home to decide a remarkable encounter.

Real will now face either Manchester City or local rivals Atletico Madrid in the last four, with the English side taking a 1-0 lead into their quarter-final second leg in Spain tonight.

“Another night of suffering, but the important thing is that we have qualified,” said Real’s veteran midfielder Luca Modric.

“We played a fantastic match, we deserved what we had, we had a fourth goal disallowed we had big chances to score even more,” he said.

“Unfortunately, we had two mistakes in crucial moments and against Real Madrid. We deserved to go through. But it was not meant to be. You need luck and it was not on our side.”

“I was disappointed that the referee had a good time with my colleague Ancelotti. I know that Carlo is a gentleman and a nice guy but when I go I see him smiling and laughing out loud with the opposition coach and I think this is very, very wrong time to do this at the end of 120 minutes of fight, when you give every last drop, to go [and see that]. I think this is very, very bad timing.”