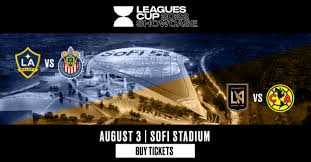 April 19 – The SoFi Stadium in Los Angeles, one of the candidate venues for hosting matches at the 2026 World Cup, has scheduled its first-ever football (soccer) event for this August.

The doubleheader will serve as a preview to the Leagues Cup, which will be an annual, month-long official tournament between MLS and LIGA MX clubs, kicking off with its first edition in the summer of 2023.

The double header will be the start of a number of one-off matches to be played at the stadium, though the teams and dates are still to be announced.

The announcement of the host venues and cities for the 2026 World Cup is expected next month. Los Angeles has two venue bidding with the Rose Bowl

The SoFi Stadium – built by Arsenal owner Stanley Kroenke at an estimated cost of $5-6 billion – opened in September 2020 and is the home of the NFL’s Rams and Chargers.

It spectacularly hosted Super Bowl LVI in February when the Rams defeated the Cincinnati Bengals in front of a capacity crowd of over 70,000. It would not be a surprise if it was chosen to host the World Cup final in 2026.