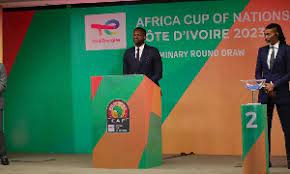 April 20 – Record seven-time Nations Cup winners Egypt were handed a difficult draw alongside Guinea, Malawi and Ethiopia in Group D of the qualifiers for next year’s Africa Cup of Nations finals in the Ivory Coast.

The Pharaohs will be on their guard in a group with Guinea and Malawi, who both progressed to the last 16 earlier this year in Cameroon.

The Guineans are traditionally a difficult team to beat and Malawi demonstrated that they are no pushovers despite a national FA in turmoil. Ethiopia complete the group.

Bafana Bafana, who failed to qualify for the 2021 Africa Cup of Nations, have once again been given a very tricky route to the finals, facing Morocco, neighbours Zimbabwe and Liberia in Group K.

Defending champions Senegal will be happy to play Benin, Mozambique and Rwanda in Group L. None of Senegal’s opponents played in this year’s finals tournament.

In Group H, Ivory Coast were paired with Zambia, Comoros and Lesotho, but they will qualify automatically as hosts of the finals. Forty-eight countries were split into 12 groups of four, with the top two in each group qualifying the finals.

Kenya and Zimbabwe, who have both been banned from international football by global governing body FIFA, were included in the draw, but they will be expelled from the qualifiers if their suspension has not been lifted two weeks before the qualifiers’ kick-off at the end of May. In Group C, the Harambee Stars were drawn along Cameroon, Burundi and Namibia.

Ivory Coast will host the Africa Cup of Nations in June and July next year. Later this week, the host nation will elect a new president for its federation, with Didier Drogba the most-high profile candidate in the race.