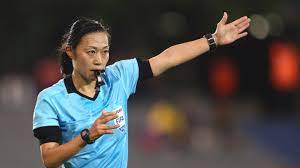 Alongside Yamashita will be assistant referees, Makoto Bozono and Naomi Teshirogi. They will officiate tonight’s Group G match between Melbourne City FC and Jeonnam Dragons at the Pathum Thani Stadium in Bangkok, Thailand at 9pm (local time).

Kyoung-min made history when she was appointed to the Group J contest between Kitchee SC and Chiangrai United on April 16.

The AFC has not been afraid to promote its female match officials and these women are becoming regulars in the top flights of the men’s game. In May 2019, Yamashita alongside Bozono and Teshirogi became the first all-female cast to officiate an AFC Cup match when they oversaw the tie between Myanmar’s Yangon United FC and Naga World of Cambodia.

Similarly, Kim also officiated the AFC Cup match between Ceres Negros FC from the Philippines and Vietnam’s Becamex Binh Duong in 2019 and all four female officials were also appointed to the AFC U23 Asian Cup Uzbekistan 2022 Qualifiers in October 2021.

“Their selection reinforces the AFC’s commitment to strengthen and develop the women’s game at all levels as well as in ensuring the AFC’s women match officials continue to receive the highest standards of quality education and expert guidance to scale the biggest stages in world football,” said the AFC.