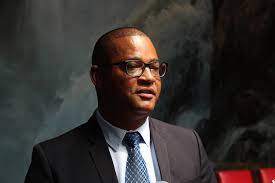 April 25 – A normalisation committee running the affairs of the Namibia Football Association (NFA) has fired NFA Secretary General Franco Cosmos with immediate effect after he was found guilty on five counts out of the nine brought against him followed months of division and in-fighting.

The committee was officially appointed by FIFA in March and to enable the secretariat to continue with its administrative functions without disruption it appointed Jacqueline Gertze in an acting capacity until further notice.

Cosmos (pictured) was himself a member of the first normalisation committee tasked to fix football in Namibia in 2019 and became NFA Secretary-General in 2021 after holding the post on an interim basis.

“The SG is relieved from his duties, effective 21 April,2022,” a statement from the Normalisation Committee (NC) said following a full review of his disciplinary record.