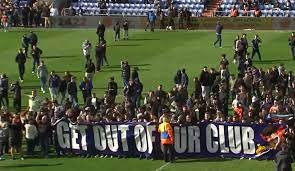 Oldham were founder members of the Premier League in 1992 but were demoted from League Two at the weekend and will play next season in the National League.

Relegation with two games still to go ended the club’s 115-year stay in the Football League prompting fury among fans who called for the departure of owner Abdallah Lemsagam.

Players had to be escorted off the pitch during a mid-match pitch invasion. As protesters refused to disperse, the game against Salford was initially abandoned before the final 12 minutes had to be played out behind closed doors.

Oldham are now likely to see the ignominy of relegation followed by punishment from both the Football Association and the Football League.