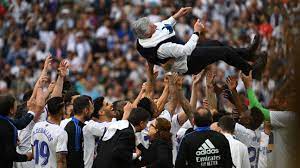 May 3 – Carlo Ancelotti has become the first manager to capture the league title in each of Europe’s top five leagues – England, Spain, Germany, Italy and France.

The decorated and highly respected Italian achieved the clean sweep after winning La Liga with Real Madrid at the weekend in his second spell with the club.

“I’m very proud of this,” he said after Real clinched their 35thleague title. “I’ve had a very long season, but I’m still enjoying it.”

The 62-year-old Ancelotti first coached Madrid from 2013-15 but didn’t win La Liga even though they did capture the Champions League.

“I have to thank Real Madrid’s president (Florentino Perez) to give me this opportunity to return,” Ancelotti said. “I wasn’t expecting it at the time.”