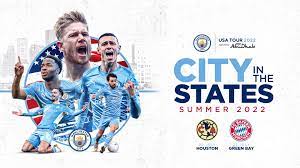 May 4 – Manchester City will play Bayern Munich in a second pre-season fixture this summer in the US. The match will be played at the 81,000 capacity Lambeau Field, home of NFL giants the Green Bay Packers.

To be played on July 23 and dubbed the ‘USA Cup’, it will be the first-ever football match to be played at the historic American football stadium.

Last week Man City announced the first match of its US trip – dubbed the Copa de Lone Star – will be played in Houston’s 72,220 capacity NRG Stadium against Mexican giants Club América  from the LigaMX. That game will be played on July 20.

Man City is expecting a significant travelling support to make the US trip. For the Green Bay fixture, season ticket holders, Cityzens and Official Supporters Club members already have a separate presalewindow with tickets for the match to go on sale to the public on Friday, May 6. Prices range from $35 to $160.

“We are really looking forward to going to Green Bay to play Bayern Munich at Lambeau Field in the second friendly of our U.S. preseason trip. We know there is a great sports history and culture across the region and it is an honour for Manchester City to be part of the first professional football game to be held atthis iconic venue,” said Omar Berrada, Chief Football Operations Officer at City Football Group.

“We are excited to have the opportunity to play in front of our fans who we know will come from far andwide as they always do. Our sport continues to develop and grow across the U.S. and we are proud to be part of that. This match will be an important piece of our preparation for the 2022/23 season.”

The Packers have partnered with Cardenás Marketing Network (CMN), to bring the friendly to LambeauField. No detail of the financial guarantees have been released.