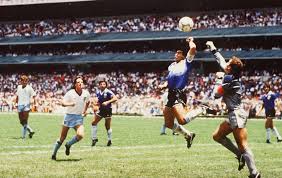 May 5 – The shirt worn by Diego Maradona when he scored the controversial ‘Hand of God’ goal against England in the 1986 World Cup has been sold for a staggering £7.1 million, the highest price ever paid at auction for a piece of sports memorabilia.

Auctioneer Sotheby’s sold the shirt in an online auction that closed Wednesday. It did not identify the buyer.

The shirt came from the collection of former English midfielder Steve Hodge who put it up for auction, 36 years after he swapped it with Maradona at the end of the infamous quarter-final in Mexico which Argentina won 2-1.

Maradona, who died in November, 2020, scored twice during the game which came just four years after Britain and Argentina had fought a war over the Falkland Islands.

His first goal was deemed as a header but the ball had bounced off his fist, out of sight of the referee, and afterwards the Argentine legend admitted it had been scored “a little with the head of Maradona, and a little with the hand of God.”

It thereafter became known as the ‘Hand of God’.

Maradona’s second goal, which saw him dribble past virtually the entire English team, was voted “goal of the century” in a FIFA poll in 2002.

Brahm Wachter, Sotheby’s Head of Streetwear and Modern Collectables, commented:  “This historic shirt is a tangible reminder of an important moment not only in the history of sports, but in the history of the 20th century.

“In the weeks since we announced the auction we have been inundated by sports fans and collectors alike, with a palpable excitement in the air for the duration of the public exhibition – and this unfiltered enthusiasm was echoed in the bidding.

“This is arguably the most coveted football shirt to ever come to auction, and so it is fitting that it now holds the auction record for any object of its kind.”