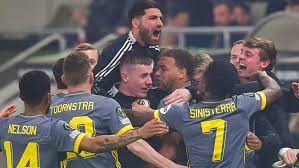 May 6 – Two decades after winning the UEFA Cup, Feyenoord Rotterdam return to a European club final after edging out Marseille to reach the apex match of the Conference League.

In the return leg of the semi-final, the French hosts created a few chances through Dimitri Payet, who later suffered an injury. But rarely did Marseille impress and truly trouble Feyenoord. The Dutch enjoyed a 3-2 lead from the first leg at De Kuip.

After the break, Marseille kept trying to attack but lacked conviction and quality.

“We never really got into our game, that’s Marseille’s credit,” said Feyenoord’s Cyriel Dessers. “But we fought and gave away few chances. In Rotterdam, it will probably be one popular festival. The supporters deserve that too, they have supported us all season.”

Twenty years ago, Feyenoord won the UEFA Cup on home soil, defeating Borussia Dortmund 3-2 in a dramatic final that was overshadowed by the murder of far-right politician Pim Fortuyn in the lead-up to the match, the first political murder in the history of the modern Netherlands.

This time, the first final of the Conference League will be staged at the Air Albania Stadium in Tirana, where, on May 25, Feyenoord will play the AS Roma of a tearful Mourinho. The Italians defeated Leicester City 1-0 courtesy of a header from Tammy Abraham, enough to win 2-1 on aggregate and reach a first European final since 1991.

“Roma is a huge club without the trophy cabinet befitting the club’s status,” said Mourinho. “This isn’t a cup yet, it’s just the final, but it means a lot to the club. Of course, I have experienced bigger moments myself. But I don’t feel this for myself, but for the people and the players. It feels like the Champions League to us.”

UEFA introduced the Conference League to offer more clubs an opportunity of European competition and distribute resources to smaller clubs across the continent.