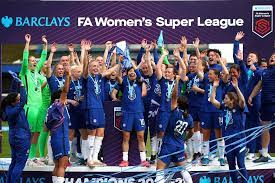 May 9 – The day after it was confirmed that their club had been bought by new investors who would maintain their commitment to the women’s team, Chelsea won their third consecutive Super League title with the last game of the season.

It is Chelsea’s fifth title win in six seasons, and impressive haul, though coach Emma Hayes said this championship was the hardest yet, with injuries to key players, a covid outbreak at Christmas, and more recently doubts over their future with the on-going ownership saga.

Chelsea clinched the title with a 4-2 win over Manchester United. Arsenal were the WSL runners up but ran a very tight race. The league leadership changed hands between the two clubs five times over the season.

Arsenal also won their final game – 2-0 against West Ham – but remained a point off Chelsea.

The Chelsea performance against Manchester United was emphatic with two of the goals inevitably coming from Australian star striker Sam Kerr who was the WSL’s Golden Boot winner.

Chelsea, like their men’s team, now move on the FA Cup final where they could complete the double if they beat Manchester City, who finished third in this season’s WSL.