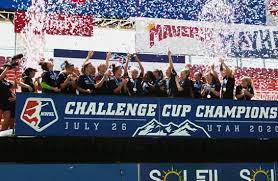 May 9 – The National Women’s Soccer League (NWSL) in the US has sold the title sponsorship of its NWSL Challenge Cup in a three-year deal to HR management specialists UKG.

No confirmed figure was given for the multi-million dollar sponsorship that will be used to increase the Cup bonus pool tenfold in 2022. The NWSL said the total pool will more than double again in 2023 making it “the first-ever women’s professional soccer tournament to achieve pay equity with its U.S. peers in the men’s game,” said the NWSL.

The prize money will be directed at the winning team, runners-up, and semi-finalists. This money comes in addition to the recently ratified collective bargaining agreement between the NWSL and the National Women’s Soccer League Players Association that will see a substantial investment from club owners in player wages and compensation packages, as well as a commitment to improved training and playing environments.

Jessica Berman, NWSL commissioner, said: “Our partnership is purpose-driven, and we believe that will eventually lead to broader impactful change, not only for women in professional sports but for women and underrepresented groups worldwide who have advocated tirelessly for the equity they deserve.”

“We refuse to accept that one organization cannot make a difference in the fight for pay equity — just look at what these remarkable women have done with their collective voice to raise awareness on a national stage about a problem that has plagued our workforce for decades,” said Brian K. Reaves, chief belonging, diversity, and equity officer at UKG.

“These worthy athletes are also champions on the field of equality. We are so proud to stand beside the NWSL and work toward bringing pay equity to a sport that, for too long unfortunately, reflected the working reality of many women. This partnership is just one of the many actions UKG is taking to raise awareness and encourage action on pay equity across all workplaces and industries.”

UKG is also partnering with NWSL players Christen Press and Sydney Leroux to further advocate for closing the pay gap in every field.

“Every player in this league has worked their whole life to play professional soccer and have the means to support themselves and their families. Pay equity goes beyond the average 18 cents less that women are paid for every dollar that a man is paid — it is about people wanting to live the same quality of life, have the same opportunities, and live the same dreams as others doing the same work,” said Leroux.

As part of a wider programme, UKG, via its Close the Gap Initiative, is contributing $0.18 — the current gender wage gap — for every employee paid each year via a UKG payroll solution – an investment of about $3 million.

“At the heart of being a great place to work is providing equal opportunity for all,” said Reaves. “Change doesn’t happen overnight, but we believe that, by partnering with the NWSL and calling attention to the persistent issue of pay inequity in this world, we are taking meaningful action to support the livelihoods and aspirations of women and underrepresented groups in the workplace, and to help end the decades-long fight for equity for all.”