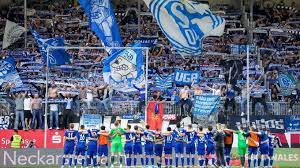 May 9 – A year after relegation, Schalke 04 is back in the Bundesliga following a win against St Pauli on Saturday.

The Royal Blues came from two goals down to stage a remarkable 3-2 victory against the visitors from Hamburg and regain their status as a Bundesliga club. St Pauli had two players send-off in the final stages of the match.

“We knew that if we score one, it will swing the pendulum,” said interim coach Michael Buskens. “The stadium will stand behind us like a wall, then we will push St. Pauli further back and create opportunities.”

Schalke have not been guaranteed the title just yet. With one matchday left in the season, Werder Bremen could still pip Schalke to the crown.

Last season, Schalke 04 endured a torrid time in the Bundesliga with boardroom bust-ups and mismanagement. They came roaring back with seven wins from their last eight matches to storm to the top of the second division.

“I’ve been associated with the club for 30 years and I’ve lived in this city for 30 years,” said Buskens. “I’ve known so many employees for more than two centuries and that’s why you have an incredible responsibility that you feel towards the people and this club. If you are in charge then you want to win and then you want to get back up as soon as possible”

Next season, Buskens will however take a step back.

“I think I said from the beginning that I would like to continue working as an assistant coach and take care of young players,” said Buskens.

In February, the German club removed Gazprom as shirt sponsor after Russia’s invasion of Ukraine. Gazprom had been a sponsor of Schalke 04 since 2007.