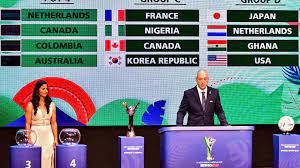 May 9 – Reigning world champions Japan will face the Netherlands, Ghana and USA at the U-20 Women’s World Cup in Costa Rica later this year.

The draw in San Jose, which featured Shirley Cruz, Paulo Wanchope and FIFA president Gianni Infantino, left the hosts in a tough group with Australia, Spain and Brazil. Costa Rica will kick off the tournament in Group A against Australia, co-hosts of next year’s Women’s World Cup.

“We want to give Costa Rica the best possible performances at this World Cup but we have to take it step by step,” said Costa Rica coach Jose Catoya. “We’ve never won a Women’s World Cup match, so we have to go out and get that first win and take it from there.”

The top two from each of the four groups will advance to the knockout phase. The tournament will kick off on August 10 and culminate with the final on August 28.

Costa Rica and Panama had been due to stage the competition in 2020, but the championship was postponed because of the global health crisis. Panama then withdrew as co-hosts.

Japan are the defending champions. They won the 2018 U-20 Women’s World Cup defeating Spain 3-1 in the final in France. “We won the trophy four years ago but we now have a completely different squad,” said Japan coach Futoshi Ikeda. “It’s a whole new challenge for me.”