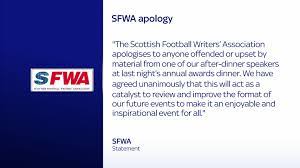 May 10 – Scottish football journalists have had to apologise after an awards event speech prompted a walkout because of alleged sexism.

The controversy centred on jokes made in a speech by Bill Copeland, a lawyer who works on the after-dinner speaking circuit.

Barbour tweeted that she had “never felt so unwelcome in the industry” while others have described the jokes as “sexist, racist and homophobic”.

The SFWA said it apologised to anyone “offended or upset” by the speech.