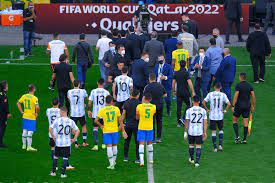 May 10 – Even though it is a meaningless fixture, the abandoned 2022 World Cup qualifier between Brazil and Argentina will have to be replayed after FIFA rejected appeals from both national federations.

Last September’s clash in Sao Paolo had to be called off amid on-field chaos caused by pandemic rule breaches. In utterly bizarre scenes, Brazilian health officials came on to the pitch minutes after kick-off to dispute the quarantine status of several Argentina players.

Both countries had already easily qualified for the World Cup finals as the top two teams in the 10-nation South American group and took part in last month’s draw.  However, the latest FIFA ruling means they will still have to play the meaningless qualifier.

Ironically they have already agreed to play a friendly game in Australia, a so-called ‘Superclasico’  scheduled for June 11 in Melbourne.

FIFA in February ordered a replay and banned Cristian Romero and then club-mate Giovani Lo Celso of Tottenham, and Aston Villa’s Emiliano Martinez and Emiliano Buendia for two matches.

FIFA’s disciplinary committee upheld the CHF 50,000 fines imposed on both as a result of the abandonment. However, it reduced a separate CHF 500,000 fine given to the Brazilian FA to 250,000 Swiss francs, and halved the Argentine FA’s initial fine of CHF 200,000.