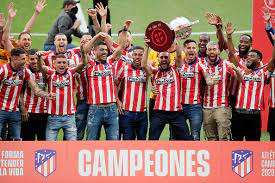 May 11 – Atletico Madrid look set to replace Plus500 with cryptocurrency trading platform WhaleFin as their new main shirt sponsor from next season.

Atletico have a number of major sponsorships about to expire including their kit sponsorship and the naming rights for their Wanda Metropolitano stadium.

Reports in Spain say the Whalefin deal is for five years and worth €40 million a season, more than double the €17 million Plus500 were paying.

WhaleFin was founded by a group of Wall Street executives in 2017 and last year secured a $200 million investment to fund expansion. WhaleFin is valued at $3 billion.

Spanish reports also say that Atletico are in closing talks with Hyundai about extending their €5 million a year sleeve sponsorship deal beyond the one year extension agreed for the 2021/22 season.

Wanda are not expected to extend their €50 million stadium naming rights deal.