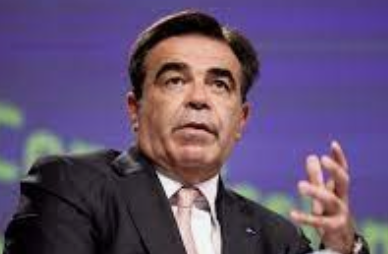 May 11 – European Commission vice-president Margaritis Schinas has told UEFA that the EU will act “to defend the football model” against any attempts to bring back the European Super League.

At the UEFA Congress in Austria, Schinas told delegates as well as FIFA president Gianni Infantino that “European football must remain open, based on sporting merit, and serve the interests of all of society, not the profit of an elite few.”

On Tuesday, the UEFA executive committee passed reforms, expanding its three club competitions as well as overhauling the structure of the Champions League. Under the new format, each team will play eight games over 10 match weeks in a Swiss league system in the group stages of the flagship competition. But UEFA abandoned plans to hand two Champions League places to individual clubs solely on the basis of their past European performance.

“Indeed, for the EU Commission, it is imperative that we work together with EU member states and UEFA and the national associations – to protect and promote the European sports model based on open competitions, solidarity and values,” said Schinas.

Last year, a cabal of elite clubs launched the European Super League, but their plans spectacularly backfired within 48 hours after a storm of protest. However, the idea to allow clubs to qualify for the Champions League based on past performance was seen as a major concession to the bigger clubs. Instead, now, UEFA will award two extra places to the countries who collectively performed the best in Europe in the previous season, a compromise that came about after listening to the fans according to UEFA’s Giorgio Marchetti and was acceptable to all stakeholders.

To preserve the European sports model, Schinas emphasised: “We will also continue to stand together and work on the same team to defend and strengthen European football as a leading success story of the European model of sport.”

In his own address, Ceferin also railed against the biggest clubs upending the continental football landscape, arguing that the majority prevailed and that “it gives us hope for a slightly less rotten world.”