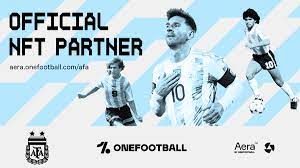 May 12 – The Argentine FA is to launch a personalised NFT platform with streaming platform OneFootball.

The deal marks an expansion of OneFootball’s operations from its core media business covering live streaming, live-scores, statistics and news.

The AFA agreement has been possible as a result of a new joint venture, OneFootball Labs, with Animoca Brands and Dapper Labs, that was announced last month. Argentine football fans will be able to buy officially licensed digital collectibles on the platform.

OneFootball said the NFTs will be offered at a variety of price points to make them widely accessible. Fans will be able to purchase and store digital collectibles with just their email address.

Lucas von Cranach, CEO & Founder at OneFootball, said: “OneFootball will take tens of millions of football supporters from Web2 to Web3 over the coming years. In order to do that, it’s crucial that we have the right partners which share our excitement about delivering a future of football that is decentralised and built on Web3. By becoming the first federation to launch licensed digital collectibles with OneFootball, the AFA will be giving fans more access and more ownership, helping to bring them even closer to the game they love.”

From a marketing perspective the AFA will bring the stars and the global recognition, while OneFootball will open up a global digital audience already consuming football.

Claudio Tapia, president of AFA, said: “Our growing partnership with OneFootball is helping us to reach fans in ever more innovative ways. Our content agreement is helping us to reach millions more fans worldwide, and we’re excited to be the first federation to release a personalised NFT platform with OneFootball, transforming in further the digital experiences for our national teams and football fans.