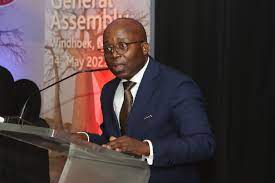 At Cosafa’s general assembly in Windhoek, Namibia, on Saturday, the president of the Federação Angolana de Futebol (FAF) Almeida e Silva received all 13 votes to take the helm of Cosafa, the Council of Southern Africa Football Associations, for a four-year term and in his victory speech the new president showed his loyalty to Infantino, pledging that the Cosafa block will support the FIFA supremo for re-election in 2023

The Angolan referred to Infantino as an inspiration.

“We believe Gianni Infantino represents the best candidate to lead global football for another four years,” said  Almeida e Silva. “He has repeatedly displayed his desire to grow African football and has backed up his words with action.”

A few weeks ago, South Sudan became the first African federation to openly back Infantino. Cosafa represents 14 member associations in southern Africa. Zimbabwe, however, is currently suspended by FIFA. The decision by the 13 member associations to throw their weight behind Infantino was unanimous, said the Cosafa president.

Infantino announced that he would stand for re-election at the recent  FIFA Congress in Doha, Qatar. So far, no other candidates have come forward to challenge Infantino, who was elected president of FIFA in 2016 before getting reelected in 2019.

While Infantino may enjoy the support of Arthur de Almeida e Silva and vice versa, questions remain over the Angolan’s integrity, even if Artur de Almeida e Silva passed the eligibility checks from Cosafa’s governance committee to win unopposed after South Africa’s Danny Jordaan withdrew from the race.

Confederation of African Football (CAF) president Patrice Motsepe insisted that no lobbying took place to clear the path for the Angolan.

In 2015, Almeida e Silva was convicted by a Luanda court for an attempt to embezzle $10 million from telecoms company Unitel. He won re-election as FAF president in 2020, but a local court suspended the election result. FAF’s electoral commission had barred candidate Norberto de Castro from standing.

Then FIFA’s chief member associations officer Véron Mosengo-Omba wrote to FAF that the federation ran the risk of getting suspended over third-party interference.