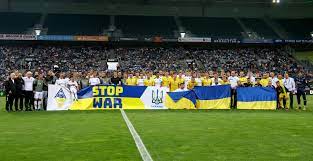 May 16 – Russian football, kicked out of international competition because of the invasion of Ukraine, is making another desperate attempt to return to the fold by once again going to the Court of Arbitration for Sport (CAS).

Russian clubs and national teams were suspended “until further notice” by UEFA in February after the country sent troops into neighbouring Ukraine.

Earlier this month UEFA this month extended to 2022/2023 its suspension of Russian teams from participating in the Champions League and all other European competitions.

Russia has already failed once at CAS and now its clubs are having another go.

Moscow-based CSKA say that that together with Zenit St Petersburg, Dinamo and Sochi they had filed an appeal with sport’s highest court.

The four would all qualify for Europe based on their current league positions and want their case to be fast-tracked because the draw for the first round of qualifying for the Champions League is scheduled for June 14.

“All clubs have requested an expedited review of the complaint,” CSKA said.

CSKA “strives to play in European competition and will fight for top places in the championship until the very end,” the club added.

Sochi added: “The actions against Russian clubs are based solely on their national affiliation, contradict sporting principles and are inherently discriminatory, insofar as football ceases to be accessible to everyone.”

“We sincerely express our hope that the CAS ruling will correspond to sporting values as defined by UEFA within the framework of its activities, and to the spirit of competition in soccer.”

Excluding the four clubs would create a knock-on effect for teams across Europe based on national ratings in the Champions League, Europa League and Europa Conference League. Zenit’s place in the next Champions League group stage will go instead to Celtic as champions of Scotland.