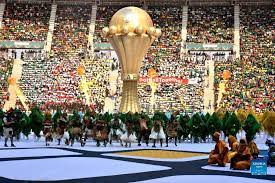 May 17 – Mauritius will play in the group stage of the 2023 Africa Cup of Nations qualifiers after Sao Tome and Principe were thrown out for fielding an ineligible player during their preliminary round tie and breaching COVID-19 protocols.

Sao Tome and Principe fielded a Bolivia-based striker who Mauritius claimed was not eligible to play because his PCR test dated more than 72 hours before the match while according to the protocol, the tests must date from 48 hours.

That constituted a breach of CAF’s medical rules and the Sao Tome and Principe federation was fined $10,000 as well as being kicked out the competition by the Confederation of African Football.

The 34-year-old scored the only goal of the first leg  of their play-off but the result was overturned by CAF’s disciplinary committee – with Mauritius awarded a 3-0 win instead.

Had the original result stood, Sao Tome and Principe would have won 4-3 on aggregate but Mauritius have now been awarded their place in the main qualifying stage for the competition and will go into a group containing former champion Nigeria, Sierra Leone and Guinea-Bissau.

Mauritius has qualified for the finals only once before, in 1974, losing all three of its games.