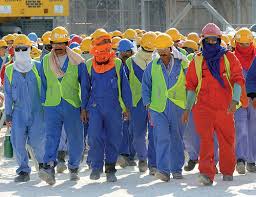 May 19 – Amnesty International, Football Supporters Europe and eight other human rights and fan groups have collectively urged FIFA to put up a minimum $440 million – roughly the equivalent of World Cup prize money – as a compensation fund for hundreds of thousands of migrant workers they claim have suffered abuses in preparation for the tournament in November.

The call follows allegations that FIFA was slow to safeguard against the exploitation of workers who flooded into the tiny Gulf state to work on World Cup infrastructure.

In an open letter sent to FIFA President Gianni Infantino, the coalition of 10 groups say FIFA should work with Qatar to “establish a comprehensive programme to ensure all labour abuses to which FIFA contributed are remedied.”

“With six months until the opening of the FIFA World Cup Qatar 2022, hundreds of thousands of migrant workers have not received adequate remedy, including financial compensation, for serious labour abuses they suffered while building and servicing infrastructure essential for the preparation and delivery of the World Cup in Qatar.”

“FIFA should reserve an amount not less than the US$440 million prize money offered to teams participating in the World Cup, to be invested in funds to support remediation.”

The letter claims Qatari authorities have “failed to investigate the causes of deaths of thousands of migrant workers since 2010”, the year the tournament was awarded to the country.

While recognising the significant progress made to protect workers’ rights in the country, the letter, written by Amnesty general secretary Agnès Callamard, states FIFA and Qatar “can and should act to provide redress and prevent further abuses from taking place.”

Foreign workers, mainly from South Asia, make up more than two million of Qatar’s 2.8 million population and the letter adds: “Given the history of human rights abuses in the country, FIFA knew – or should have known – the obvious risks to workers when it awarded the tournament to Qatar.

“Despite this, there was not a single mention of workers or human rights in its evaluation of the Qatari bid and no conditions were put in place on labour protections. FIFA has since done far too little to prevent or mitigate those risks.

“By turning a blind eye to foreseeable human rights abuses and failing to stop them, FIFA indisputably contributed to the widespread abuse of migrant workers involved in World Cup-related projects in Qatar, far beyond the stadiums and official hotels.”

“Providing compensation to workers who gave so much to make the tournament happen, and taking steps to make sure such abuses never happen again, could represent a major turning point in FIFA’s commitment to respect human rights.”

In response FIFA was quoted as saying that it was working with Qatar’s World Cup organisers, known as the Supreme Committee for Delivery and Legacy, to “implement an unprecedented due diligence process” in relation to protecting workers’ rights.

“As a consequence of the Workers’ Welfare initiatives by the tournament organisers, countless workers have received remediation in various forms, including the payment of outstanding wages, the repayment of recruitment fees through the Supreme Committee’s universal reimbursement scheme and other forms of compensation.

“As part of the Supreme Committee’s effort to ensure repayment of recruitment fees, for example, workers have received payments of a total of $22.6 million as of December 2021, with an additional $5.7 million committed by contractors. Other forms of remediation include the strengthening of company practice to ensure non-repetition, or punitive measures imposed by the tournament organisers or the Ministry of Labour.”

Qatar’s World Cup organisers insist they have worked tirelessly to improve the rights of workers on stadiums and other tournament projects. The antiquated kafala system, which forced migrant workers to seek employers’ permission to change jobs or even leave the country, has been abolished.

“Significant improvements have been made across accommodation standards, health and safety regulations, grievance mechanisms, healthcare provision, and reimbursements of illegal recruitment fees to workers,” said a spokesperson.

“This tournament is, and will continue to be a powerful catalyst for delivering a sustainable human and social legacy ahead of, during, and beyond the FIFA World Cup Qatar 2022.”