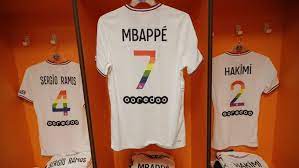 May 19 – Senegalese president Macky Sall has voiced his support for Paris-Saint Germain player Idrissa Gueye, who refused to play in PSG’s match last weekend over a shirt designed to support an anti-homophobia initiative.

The midfielder boycotted the anti-homophobia campaign for the fixture away to Montpellier when teams wore a kit showing solidarity for the International Day Against Homophobia, Biphobia and Transphobia. The jerseys featured across Ligue 1, but Senegal’s head of state has now voiced his support for Gueye. “I support Idrissa Gana Gueye. His religious beliefs must be respected,” tweeted Sall.

PSG head coach Mauricio Pochettino, who wore a rainbow armband in the dugout, said Gueye was absent due to “personal reasons” but it has since been widely reported in the French media that Gueye, a devout Muslim, did not want to wear the shirt.

The midfielder also skipped the same game last year. He claimed he was suffering from gastroenteritis at the time.

In a letter from its ethics council, the French Football Federation (FFF) has asked Gueye to explain why he sat out the Montpellier fixture.

“Your absence has led to many speculations that have been very widely interpreted as a refusal to take part in this operation to raise awareness of the fight against discrimination,” wrote council president Patrick Anton.

“Either these suppositions are baseless, in which case we ask you to express yourself without delay in order to stop these rumours,” Anton wrote. “We invite you, for example, to accompany your message with a photo of you wearing the jersey in question.”

In Senegal, where 95% of the population are Muslims, homosexual relationships are a criminal offence and can be punished with up to five years in prison.

The Gueye story comes in the week that Blackpool forward Jake Daniels came out of the close, to become the first openly gay male player in England for more than 30 years.