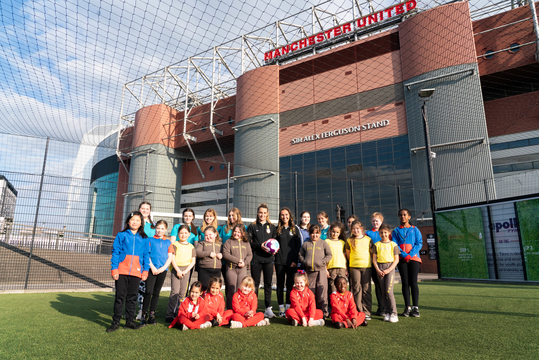 To launch the partnership, Girlguiding members from joined England’s Women’s footballers, Katie Zelem and Ella Toone for a training session at Manchester United’s Old Trafford Stadium, which will host the opening game of Women’s EURO 2022 on July 6.

To mark the partnership, Girlguiding has created a new badge for members to collect.

Through the partnership, more than 5,000 Girlguiding members are planning to attend EURO matches across England this summer.

Recent research commissioned by CHILDWISE found almost one third (32%) of girls aged 7-17 would like more opportunities to play football and more than half of girls (52%) have never watched football in a stadium, compared to 33% of boys.

The research also found 69% of girls would like to see women’s football celebrated more in the media and 71% of all children (boys and girls) think female footballers should be paid the same as male footballers.

“It will inspire long-term, sustainable positive change in women’s and girls’ football and we are delighted we have been able to team up with Girlguiding UK to support that change. Football is for all. We want to ensure whether its playing or watching, girls have the confidence to get involved and the opportunity to do so.