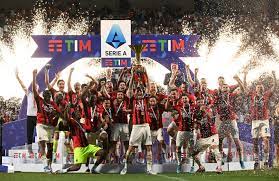 May 23 – After a decade of disappointment and frustration, AC Milan won their 19th Serie A title but the first for 11 years on Sunday to spark wild celebrations in the red and black half of the city.

A 3-0 win at Sassuolo clinched the title from under the noses of rivals Inter and vindicated Milan’s decision to appoint Stefano Pioli as manager in 2019 – a move that was initially unpopular since Pioli had been with Inter for six months.

The season-long duel between the Milan foes came down to the final day with the Rossoneri only needing one point to clinch its first scudetto since the 2010-11 season.  Although defending champions Inter also won 3-0, against Sampdoria, they could do nothing to prevent the title going to Milan.

“I’m happy for me, the fans, the players and the whole Milan world, they all deserve this scudetto,” said Pioli. “We always believed in it. The players were fantastic from the first match to the last, never losing intensity and never stopping working.”

By winning the title, midfielder Daniel Maldini followed in the footsteps of his father Paolo Maldini, who won seven league titles with Milan, and grandfather Cesare Maldini with four.

But Pioli left the title celebrations empty-handed after having his winner’s medal stolen.

“They snatched my medal in the celebrations: if you can make an appeal I thank you, it is the only one I have,” he said. Thankfully, Serie A heard his appeal and have promised to give him another medal.

At the other end of the table, Salernitana secured another season in Serie A despite losing 4-0 at Udinese as Cagliari could only draw 0-0 at bottom club Venezia.

Salernitana, which had spent nearly the entire season rooted to the foot of the table, finished one point ahead of 18th-place Cagliari. It was another miracle from coach Davide Nicola, who has steered several clubs away from relegation and had promised to walk all the way to Rome if he did it again with Salernitana.

Juventus, meanwhile, ended a hugely disappointing campaign under Massimiliano Allegri by only managing fourth, their only consolation being qualifying for next season’s Champions League.