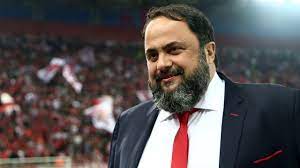 May 23 – This week Nottingham Forest owner Evanglos Marinakis will potentially experience the euphoria of making it into the English Premier League via a play-off against Huddersfield Town. While things are on the up in England, in Greece where Marinakis owns Super League champions Olympiakos, he is far from happy.

Greek football and its federation has long been plagued buy in-fighting, match-fixing and multiple allegations of corruption. The Greek FA is perhaps UEFA’s most troublesome child, despite repeated attempts as disciplining them.

At a Super League board meeting last week Marinakis (pictured), not for the first time, railed against what he sees as the culture of corruption that pervades Greek football. In particular who drew attention to the Greek club licensing procedures and the controversy surrounding Aris FC who were granted a UEFA license to compete in European competition but had their license stripped by the Helenic football federation.

Marinakis points to corruption at the heart of the federation pinning the blame squarely on Vassilis Sarakis. He says the issue with Aris FC cast another long shadow over the integroity of the whole of Greek football.

“The issue that’s arisen with the licensing of Aris FC doesn’t concern just one team. In essence, it highlights a miserable state of decline that has engulfed Greek football and permeates the Hellenic Football Federation; it’s absolute thuggery,” said Marinakis.

“What has happened? A guy named Sarakis, who should have been expelled from the Hellenic Football Federation, when he publicly confessed that he provided a tailor-made legal opinion, in violation of the federation statutes and licensing regulations, is today the person who decides on the licensing of teams; who processes the confidential data of our companies and determines, with his recommendations, whether we will play in Europe or not, whether we will make transfers, whether we we’ll have six transfers, etc. This man has already been dragged before a hearing by the ethics committee for violating the licensing regulations – and its decision is expected, which could get him suspended from professional football for life,” he continued.

Marinakis said that the power Sarakis wields is both too great and too dangerous for the health of a transparent and sustainable football league, arguing that Sarakis has the power to fix leagues and destroy the investments made by club owners in their clubs.

“This man, who provided ‘mail-ordered’ opinions in order to circumvent the licensing regulation, is now responsible for examining the files of all of us, recommending whether we will be licensed or not; whether we will play in Europe or not. In other words, he is the official that determines not just one match, but an entire season; a guy who admits to being someone’s pawn. I say again, instead of being thrown out, he was rewarded and became the head of licensing, determining the future of all of us,” he said.

“So what else needs to be done? We are investing millions, our athletes are giving their utmost effort, yet this will be undermined by Sarakis and Filippoussis through tampered organizational charts? Where do you think this dishonesty will lead? Will we and our fans sit idly by and tolerate your ‘fixing’ and corruption every time? Will low-level, untrained and uneducated people, who do not even speak English, determine whether we will play in European competitions?”

Marinakis warned that the “serious people” running Greece’s clubs will not put up with this for much longer, hinting at a breakaway unless there is change and an end to match manipulation both on and off the field.

He suggested three solutions to key problems: an international panel of 10 referees for the Super League who are independent, higher quality federation executives who can liaise with UEFA on club licensing, and a more serious culture and transparency to attract new sponsors to the league and make Greece’s professional game sustainable.

Certainly Marinakis has fought bitter battles with other club owners in Greece in the past over multiple allegations of match-fixing, but he closed his comments saying: “I may also clash with AEK, PAOK, Panathinaikos, but this is on the pitch. Here, we must calmly make decisions that will be for the good of both big and small teams.”

Is it time for Greek football’s club owners to bury the hatchet? Just not in each other.